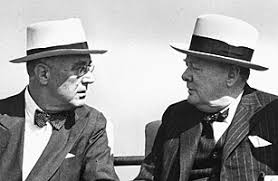 It was February 9, 1941. The speaker had a distinctly upper class English accent, his syntax old-fashioned. You could see the stocky, bulldog determination in his stance and hear the growl of his voice. The man he addressed was the President of the United States, Franklin D. Roosevelt. Winston Churchill was the speaker. His country faced its most perilous hour; NAZI Germany threatened to overwhelm Europe, and Britain, and Churchill stood almost entirely alone in the effort to stop them. They needed the help of the United States. But Churchill was a proud man. He knew his people were up to the task of defending their shores. What he needed from the United States was the benefit of its vast natural resources, and the talent and industry of her people. If Roosevelt would allow the nation to build armaments and provide supplies, Britain could do their part.  What, Roosevelt asked, could America do to help? “Here is the answer which I will give to President Roosevelt,” Churchill declared, “Give us the tools, and we will finish the job.”

Ephesians 4:11-16 speaks of the need to “equip the saints” for ministry. So what does it mean to “equip the saints”? How do we go about this important task? The word “equip” (or “prepare”) comes from katartidzo – “to mend, restore, prepare or supply” (DBAG 417). Scholar J.B. Phillips explains: “His gifts were made so that Christians might be properly equippedfor their service, that the whole body might be built up.” Today’s English Version renders it this way: “He did this to prepareall God’s people for the work of Christian service, to build up the body of Christ.” The NRSV says it this way: “To equipthe saints for the work of ministry, for building up the body of Christ.”

To understand this rich concept, note the following:

* Soldiers who fight for their country need to have the right equipment, weapons, and the training necessary to use them all.

* A skilled surgeon needs not only the instruments of surgery, but also the sterile environment in which to do the operation.

* The master carpenter needs his tools all laid out in front of him, ready to create something special.

Each of these people need the tools and the training to use those tools and the emotional maturity use the tools properly. Look at the congregation of which you are a part. Where will it be in twenty years time? Will it still be standing strongly for Christ and his word? Will the next generation have been provided with a solid foundation by those of us who are here now, a safe, Christ-like family in which to grow and be strong: How will this happen? The answer lies within us, our willingness to build, to serve, to teach.

Life is tough; if we are to survive, and even thrive in our spiritual lives, we are going to have to be equipped for the task. I am convinced that many churches and many Christians find their efforts hampered because they do not have the tools to do the job. Are the saints in your congregation equipped? Are you? Do you want to be better? Are you willing to be given the tools, to be told how to use them, to train yourself in their use?